Helmut Diefenthal’s story is one of courage, commitment and compassion. It began in 1924 in Berlin Germany and became intertwined with Nazi Germany when he was conscripted into the German Army as a medic during World War II. Following many harrowing experiences on the Russian front, Helmut was quietly discharged due to his Jewish ancestry. He then vowed that if he survived the war he would devote his life to education and service. He has done just that.

Immediately following his discharge and escape from Nazi Germany, Helmut earned an M.D. Degree and a PhD at the Free University of Berlin. Thereafter, he completed an internal medicine residency, during which time he met and married his wife Ro, then an X-ray technologist.

During the next two decades, Helmut, always with Ro accompanying him, journeyed to various parts of the world pursuing his commitment; working as a medical missionary in Malaysia, and subsequently at a TB hospital in Chicago and a remote Lutheran hospital in Gonja.

Learning that Kilimanjaro Christian Medical Center in Moshi, Tanzania was planning a radiology department, Helmut and Ro returned to the U.S., where he completed a residency in radiology.  In 1971, following his residency, Helmut returned to Tanzania and served as the first head of the KCMC radiology department.  Two years later, Helmut and Ro returned to the U.S. so their children could be educated in the U.S., and worked in their chosen professions. They returned to KCMC in 1988 as self-supporting missionaries of the Lutheran Church in America, with the ambitious goal of expanding improving radiological services in Tanzania.  They have lived and tirelessly worked in Tanzania since that date.

The challenges in Tanzania were many, and they were daunting. Equipment was dated, scarce and often in disrepair, power sources were sporadic, and the needs of the population were overwhelming. Helmut worked 10 or more hours per day, seven days a week, in an effort to achieve his goals. His goals were not only to expand radiological services at KCMC, but to expand the services to remote parts of the country and to train radiologists and radiology assistants to serve those areas. In 1993 he founded the Kilimanjaro School of Radiology, which provided the opportunity for non-M.D. medical professionals who had practiced for five years to become certified as Assistant Medical Officers (AMOs) in radiology after two years of specialized radiology studies.  Helmut also started a radiology residency program for physicians, with the first class of residents graduating in 2002.

Recognizing the need for outside financial support, in 1988 Helmut and one of his colleagues founded the East Africa Medical Assistance Foundation as a tax exempt, nonprofit corporation. Since that time EAMAF has provided financial assistance to the KCMC radiology department and School of Radiology. This support most recently resulted in a program to supply portable ultrasound units at facilities to which KCMC’s  AMO graduates are assigned.  To date, generous donors have enabled EAMAF to purchase and distribute 12 portable ultrasound units. In addition, EAMAF has administered a physician volunteer program whereby doctors from the U.S. and other countries have worked, taught and learned at KCMC for periods ranging from one to several months.

Helmut and Ro, as well as EAMAF, anticipated the day when Helmut would be unable to pursue his rigorous work regimen.  That day arrived, and Helmut and Ro returned to the U.S. in the summer of 2014.  They were able to spend some years with their family, but Dr. Diefenthal passed away in 2019 at the age of 95, and Ro a year later, just shy of her 94th birthday.  EAMAF and their legacy lives on in the dedicated doctors Helmut trained, the efforts of the EAMAF board, and the generosity of our donors. 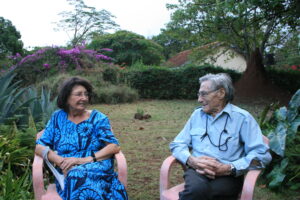