In Africa there is an appalling absence of cardiac care. Treatment for heart disease in most lowand lower-middle income countries is largely restricted to national or regional referral centers, and provided to a small number of people by a few specialist physicians. Children and young adults are hardest hit, as they are the populations most affected by heart disease in low-income countries. They suffer mainly from congenital and rheumatic heart disease. Many die young.
These early deaths can be prevented.
A group of physicians, hospital administrators and advocates in Tanzania, the Netherlands and the U.S. is helping plan for construction and start-up of a cardiac care center at Kilimanjaro Christian Medical Center (KCMC), a specialty hospital in Northern Tanzania. The KCMC Cardiovascular Centre will offer a full range of treatments for children and adults with heart disease. KCMC is a public/private partnership with the government of Tanzania, and has an exceptionally strong leadership team, under the direction of Professor Gileard Masenga, Executive Director. With a track record of steady and impressive growth including new specialties, KCMC will send a full team of physicians, technicians and nurses to be trained as cardiac specialists in India for three years, returning to open and run KCMC’s cardiovascular center. KCMC plans to introduce cardiac care to the primary and community care levels in its region as well, through a training program to enable screening and referral of patients, and provide long term management of heart disease in their communities. The result will be a comprehensive cardiac program at all levels of the health system.
This initiative will be a model for developing cardiac care in a low-income setting where none exists – starting from scratch. KCMC is engaging with the Ministry of Health in its planning, so this model can be replicated elsewhere in Tanzania. Detailed plans have been developed for financing, construction and start-up, and also for longer-term operations of the center so it is sustainable. The model is expected to include a pilot program developed in collaboration with the Ministry of Health to raise awareness and understanding of rheumatic heart disease in children, which can be prevented.
Most importantly KCMC aspires with its partners to make the proposed cardiovascular center a training center for East and Southern Africa, as it has with some of its other specialty departments. KCMC’s proximity to an international airport, its fiber optic internet capability for live teaching, its medical and nursing schools, and its research center, make KCMC well positioned to be a regional leader to train others. This project has the potential to catalyze the development of cardiac care for children and young adults in Africa at a scale that matters.
The estimated budget for construction and start-up of KCMC’s Cardiovascular Centre is about $7.8 million. We have a preliminary architectural design, more detailed case statement, and financials for capital needs as well as the operating budget that we can share. Our contact details are on the final page.

Millions of children and young adults in developing countries die each year from heart disease –
deaths that could have been prevented. Despite the fact that in the developed world we have known how to treat heart disease for generations, in many parts of the world access to lifesaving cardiac care does not exist.

Currently in Tanzania, cardiac care services are quite limited. They are found primarily in Dar es Salaam, the commercial capital. Tanzania has a population of 58 million, with 44% under the age of 15. There are millions of children and adults with heart disease that have no access to care.
Many of those most affected by heart disease in Tanzania are children. Congenital heart defects are the most common birth defect worldwide, and the birth defect that causes the most infant deaths. Without treatment, many of these children die in infancy, or they survive but do not thrive. If they were living in a developed country, their heart defects could be corrected and almost all would go on to live full lives.
In addition, each year thousands of children in Tanzania acquire rheumatic heart disease (RHD), a condition in which permanent damage to heart valves is caused by untreated strep throat. If untreated, RHD can lead to stroke, heart failure, and death. RHD can be prevented through antibiotic treatment. If RHD is diagnosed before it has progressed too far, surgery can repair the heart valves. Congenital heart disease and RHD in children are largely unrecognized and untreated in Tanzania, and in much of Africa. 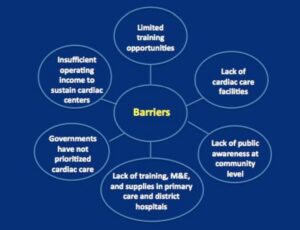 There are numerous barriers to accessing care, shown above. But they are solvable, and don’t
require new technologies. They mostly require focus, and the will to make a change.
There are effective models now for how to diagnose and manage heart disease in children in low resource settings at the primary and community care levels, using trained nurses or mid-level medical officers. This enables low-income countries with few specialists to begin to introduce cardiac care. But these healthcare providers are limited in what they can offer. For many of the affected children who have severe chronic disease and heart failure, they need higher-level medical management and in some cases require cardiac surgery to correct damaged or defective heart valves. This can only be done at a cardiac specialty center.
One key challenge is how to start cardiac centers from scratch where there are no trained
specialists and no facility. What would the design look like? What models exist to sustainably fund the annual operating budget? And critically, how do we train cardiac teams when few or no 3 training programs exist in a country? Global health experts are working on this. New models are in development:
1. Training full teams of African cardiac specialists, e.g. sending a team to India to train
2. Financing construction and operations of cardiac centers in new ways
3. Bringing cardiac care into primary care through task shifting and task sharing, using
nurses and mid-level officers supervised by a small number of cardiologists.
These solutions are coming together in plans for the new cardiovascular care center in Tanzania. 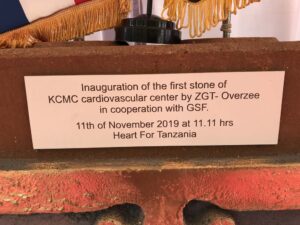 Partners in the U.S. (Minnesota), and the Netherlands, are helping KCMC plan for construction and start-up of the cardiac care center at KCMC. KCMC (www.kcmc.ac.tz) is a 500-bed teaching hospital, and the major referral and specialty hospital for Tanzania’s Northern Zone. It is one of four zonal hospitals in Tanzania, supported by the government. The project’s Netherlands advisors are consultants in vascular surgery Prof. Sjef van Baal, cardiology Dr. Salah AM Said, and cardiac surgery Prof. Jan Grandjean from ZGT Hospitals, Almelo-Hengelo and MST Hospital, Enschede.
With a $7.8 million investment, KCMC will build a sustainable cardiovascular center with two surgery suites, two cath labs, 120 beds, and ambulatory services. The costs are $2.8 mil to construct the building, and $5 mil for equipment and start-up. Funding sources include:
$500,000 already raised in the U.S., a pledge from the Good Samaritan Foundation in Tanzania to raise $500,000, and about $5 mil as a loan to cover equipment and start-up costs. The loan will be repaid through net income that will be generated over the first six years of cardiovascular services.
To overcome problems finding well-trained cardiac specialists to work at KCMC, the Minneapolis Heart Institute Foundation (MHIF) will send a full team of Tanzanian physicians, nurses and technicians to train for up to three years in cardiac care in Bangalore, at an excellent high volume center there. The team will then return to Tanzania to run KCMC’s center. The training initiative is under the direction of cardiac surgeon Dr. Vib Kshettry, Director of MHIF’s Global Outreach Program. He recently helped create the first cardiac surgery team in Ethiopia (pop 109 mil), using this same approach. Funding for training of the Tanzanian team has been secured already.
This training model could be replicated elsewhere.
KCMC is well situated for training and convenings – it’s near an international airport
(Kilimanjaro International Airport) with direct flights to East African countries and to the
Netherlands, and has fiber optic cable for live, long-distance teaching, developed with its
education and research partner Duke University School of Social Medicine.
The Tanzanian government supports this initiative. KCMC is run as a public/private partnership between the Tanzanian government and the Good Samaritan Foundation, which owns KCMC.
This public/private partnership has helped KCMC to have a stable and growing operating
budget, while expanding specialist services. The government pays for KCMC salaries and
selected other hospital costs, as well as KCMC’s medical and nursing schools. Patient care is supported primarily through the government’s National Health Insurance Fund, as well as some private pay patients.
KCMC’s strong leadership has enabled recent expansion. It has developed specialties and
facilities in radiology, emergency services, cancer, ophthalmology, and dermatology, supported in part by expertise and funding from clinicians, hospital administrators, academics and nonprofits in the Netherlands and U.S.
The Minneapolis Heart Institute Foundation (MHIF) has supported KCMC’s research team to develop a rheumatic heart disease prevention initiative beginning with a prevalence study. It’s being done in concert with the Ministry of Health, based on a successful model MHIF helped develop in Ethiopia.
We emphasize the important benefits of KCMC’s proposed cardiovascular center to children and young adults. They suffer primarily from congenital and rheumatic heart disease, and the humanitarian need is high. We note that the capital investment and training will include treatment for a full range of cardiac conditions.

KCMC hopes to send its team of physicians, technicians and nurses from KCMC to India for training beginning in June 2021, if the Covid-19 situation allows. Our goal is to have raised the full funding for construction - $2.8 mil - by June 2021, so the launch of the project is secure before the medical team leaves for training in India. We have $500,000 raised from the U.S. so far, and the Good Samaritan Foundation in Tanzania believes they are on target to raise $500,000 by then.
The overall cost of the project including equipment and start-up funds is $7.8 mil, for 2 ORs, cath labs, 120 beds, and ambulatory care. This is a relatively small investment, compared to the cost of developing an equivalent cardiovascular center in a high-income country. Donor support for this initiative would have an outsized impact on children and young adults in Tanzania, and also on Africa’s capacity to bring cardiac care to multiple countries.

Several new initiatives have led us to believe that Africa is increasingly positioned to develop indigenous cardiac care - some examples below. There are others. Some are already working on the ground in Tanzania, and elsewhere in Africa, offering opportunities for partnership for KCMC.
Led by cardiologist Dr. Gene Bukhman, groups at Brigham and Women's Hospital, the
Department of Global Health and Social Medicine at Harvard Medical School, and Partners in Health (PIH) have been collaborating over the past decade to develop, implement, and evaluate integrated delivery strategies for severe chronic noncommunicable diseases (NCDs), including heart disease. This collaboration has resulted in: (1) the PEN-Plus delivery model – that includes enabling some cardiac care to be integrated into primary care and district hospitals under the supervision of a cardiologist; (2) agreements with the World Health Organization to scale PENPlus collaboratively in the Africa region.
The Lancet NCDI Poverty Commission launched a report in Sept 2020. Led by two cardiologists, the Commission makes the case for prioritization and investment in severe, chronic NCDs and injuries in low-income and lower-middle income countries, including for treatment of congenital and rheumatic heart disease. Countries in the NCDI Poverty Network, comprised of more than 300 leaders in 16 low and lower-middle income countries, are doing national planning to address NCDs of poverty, including addressing some healthcare interventions for cardiac care.
They are advocating for investment by funders and governments.
Please let us know if you would like any additional information.